Getting ready for the big game? Here’s a recipe that you can make day-of for fan favorite cocktails.

Freshen up your drinks at this weekend’s party with this DIY Ginger Beer concentrate. From a Moscow Mule to a Dark ’n’ Stormy, to your favorite non-alcoholic sips, let your friends revel in the quality and flavor that accompanies homemade ginger beer. The really wonderful thing I’ve found is that with the concentrate, you can add as much or as little ginger to your beverage as you like. Sometimes with mixed drinks, I like a little more ginger flavor than I find in bottled store-bought ginger beer, and this DIY recipe is simple perfection. 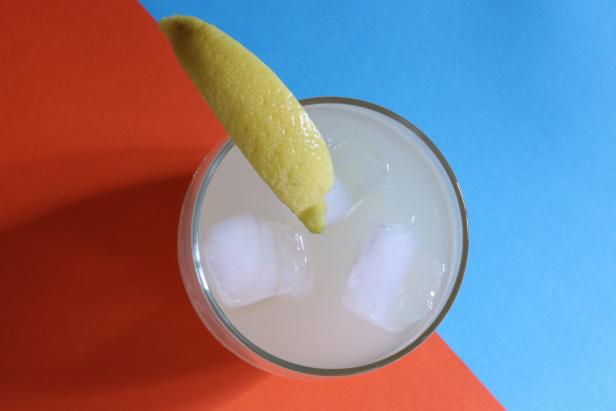 The recipe calls for easy ingredients, and just a few kitchen tools:

Begin by grating the ginger on a plate, so you can easily capture the shavings and the juices that emerge from the root. No need to peel the ginger in advance. I opted away from using a blender or food processor to grate the ginger, but go that route if you’re making a large quantity. 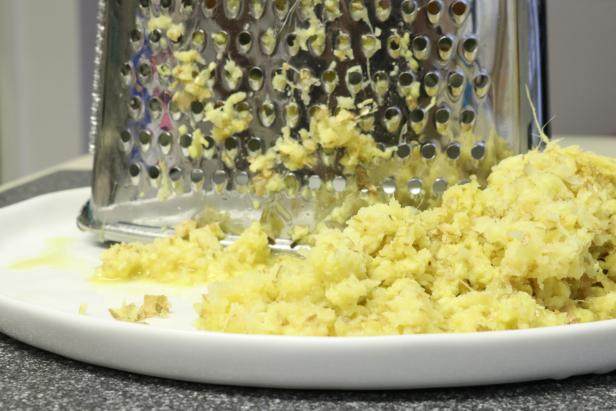 Transfer the ginger and its juices, as well as a 3/4 cup of white sugar and 3/4 cup of water into a small saucepan. Stir it over low to medium heat until the sugar dissolves. Creating a simple syrup concentration with the ginger in the pan helps to infuse the flavors.

Remove the concentrate from the heat, and allow it to steep with the ginger for another hour. During this time, attach a piece of double layer cheesecloth atop a measuring cup with a rubber band. 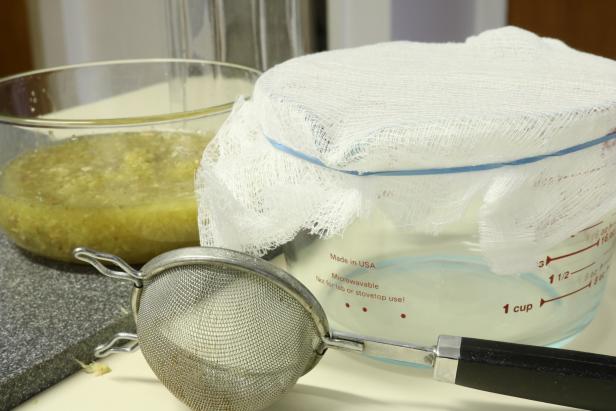 After the concentrate has infused to perfection, pour it on top of the cheesecloth and into the measuring cup. 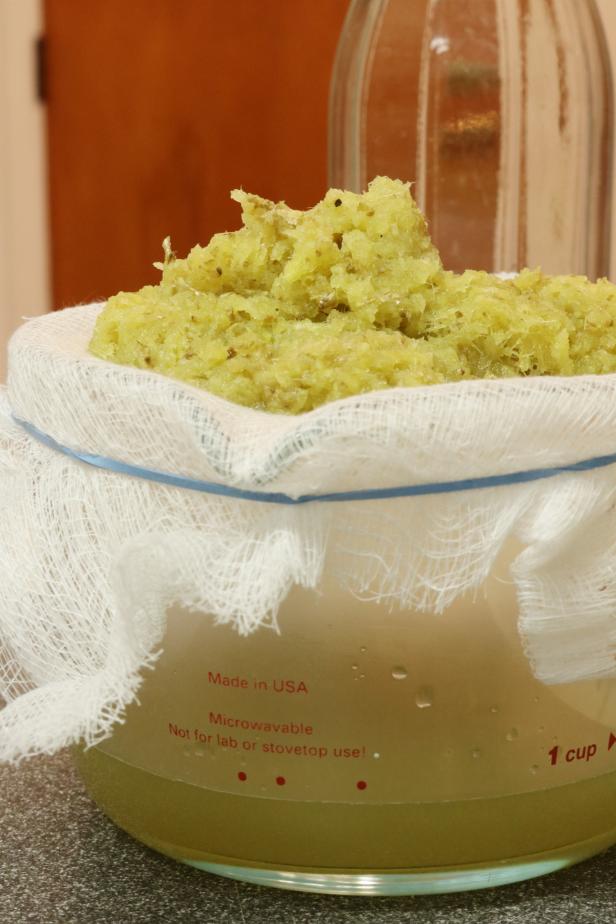 Remove the cheesecloth from the measuring cup, and squeeze the grated ginger to remove any remaining liquid (I got an extra 1/4 cup out of the squeeze!). 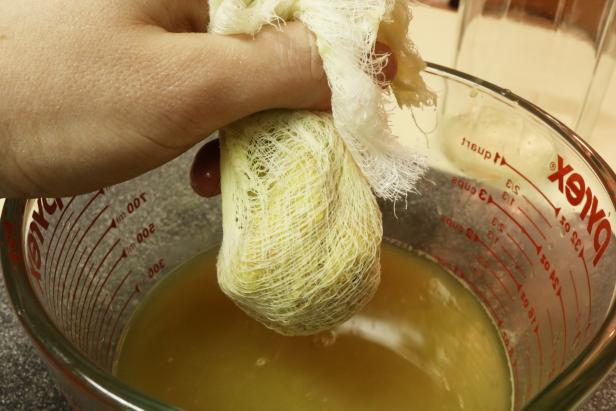 Pour the concentrate through a fine mesh strainer to capture any lingering ginger gratings that may have sneaked through. 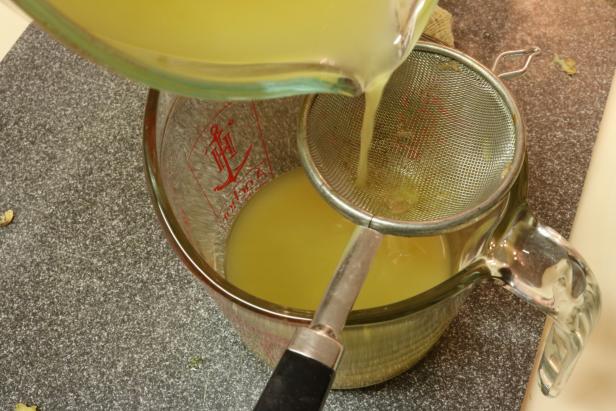 Add three tablespoons of lemon to your concentrate (the juice of roughly 1 lemon), and transfer the concentrate into a jar for storing, and chill in the fridge until you’re ready to serve. The batch I made measures approximately 24 tablespoons of concentrated syrup. 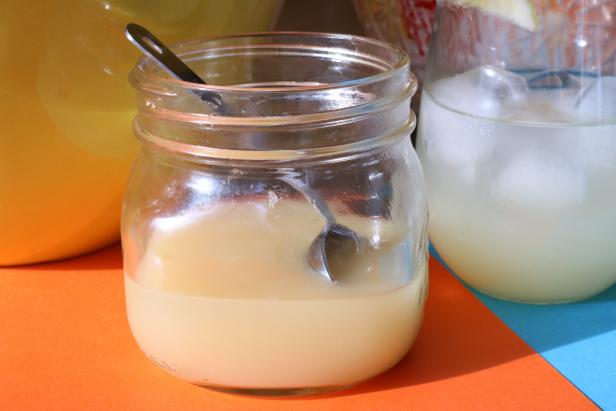 Here are a few recipe ideas to get you started:

Mix 6-ounces of sparkling water with 3 tablespoons of ginger beer concentrate. Alcohol is optional (if you’re looking for that, try a shot of vodka or spiced rum). Serve over ice. (For bonus flavor, stock flavored sparkling water for your mixed drinks).

Try 3 tablespoons of ginger beer concentrate mixed with 6-ounces of soda – like Pepsi or Coke – and serve over ice. 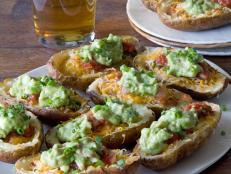 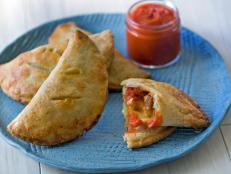 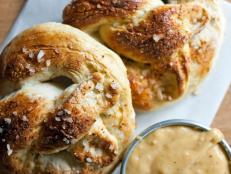 Trade in the tortilla chips for restaurant-style potato skins topped with all the good stuff: guacamole, sour cream, scallions, cheese, bacon and more. (And guacamole does not cost extra.) Get the recipe.

We all know that pizza's a crowd-pleasing food that can disappear in seconds. These hearty hand pies are a perfect accompaniment to other bite-size party snacks. And they're simple to make, too. Get the recipe.

Nothing goes better together than pretzels with beer cheese and your favorite ice-cold brew. Get the recipe for both.

Use bamboo toothpicks to serve these filling marinara meatballs. Get the recipe.

Peanut butter and marshmallow fluff make the perfect dessert or appetizer dip. Serve with graham or animal crackers. Get the recipe.

A cheeseburger is perfect for any occasion. Whip up these mini versions with Cajun seasoning, ranch and bacon for a zesty kick. Get the recipe.

Expecting an entire fan section in your living room? Serve up this Southern-style pimento cheese that can feed at least 20 people. Get the recipe.

Whether you're headed to a summer picnic or a Super Bowl party, you can't go wrong with a batch of homemade potato salad in tow. Get the recipe.

Bring meat, seafood and vegetarian lovers together with these twists on classic fundido dips. Get the recipes (three!).

For a quick crowd-pleasing food that won't bust the budget or your time, pick up a rotisserie chicken from the supermarket; then pull it apart and serve it as barbecue chicken sandwiches or sliders.

Soothe anxious fans with a bottomless bowl of this crunchy-meets-salty snack. Get the recipe.

Keep your health-conscious guests in mind when planning your menu, and serve this spicy dish. Get the recipe.

For the perfect mix of sweet and savory, spread an herbed cream cheese on toasted baguette slices and garnish with dried fruits. Get the recipe.

Mexican beer partners with a handful of spicy sauces to create the best complement to chips and salsa. Get the recipe.

Grab a lager from the pack to flavor bratwursts. Add Dijon mustard and honey, and grill them for a perfect portable treat. Sub a hot dog bun for a freshly-grilled baguette. Get the recipe.

Deviled eggs are a classic party appetizer, but we've taken inspiration from favorite flavor combinations to put a new spin on the expected. BLT? Yup. Pesto? You know it. Get the recipes (three!).

You don't have to be from Philly to enjoy this staple sandwich. Make this with store-bought ingredients to save you time. Get the recipe.

Too much yelling at the TV? These tangy cashews will quiet the room. Get the recipe.

Help guests satisfy their salty tooth with a serve-yourself snack station stocked with kettle chips, savory seasonings and gourmet toppings. Get the how-to.

Photo By: Flynnside Out Productions

Your guests may not agree on what team to root for, but they'll all agree this healthy version of wings is worth cheering for. Get the recipe.

Cornbread muffins, your favorite chili recipe, sour cream, cheese (duh!) and green onions are all you need to make this warm and cozy winning dish. Get the recipe.

Photo By: Flynnside Out Productions

Skip the store-bought dips and impress guests with this creamy lump crab and corn mixture served hot with toasted crostini. Get the recipe.

Throw sausage and peppers on the grill along with your burgers to make cheesy, easy-to-eat quesadillas. Get the recipe.

If you just found out you're hosting the Super Bowl at your house, fear not. Three major ingredients create one delicious and good-looking appetizer in a jiff. Get the recipe.

I don't trust anyone that doesn't like cheese. This bubbling dish calls for a combination of three tasty cheeses — white Cheddar, Gruyère and Swiss — making this mac 'n' cheese a creamy comfort food that's destined to become the center of attention at your next game. Get the recipe.

The only thing better than tacos are miniature tacos. Prep the fillings ahead of time, then assemble them in the shell right before guests arrive. Get the recipe.

Satisfy their sweet tooth during the halftime show with chocolate cupcakes flavored with Coca-Cola and salted peanut butter frosting. Get the recipe.

Balance all those savory flavors with a touch of sweetness. These triple chocolate brownies will be the perfect treat for your armchair athlete. Get the recipe.

If you have slow-cooked pork or chicken, spread it between two tortillas with cheese, spinach, barbecue sauce and salsa. Get the recipe.

The combination of hot sauce and maple syrup will take your salmon game up a notch. Make the marinade the night before to save time on game day. Get the recipe. 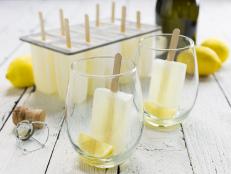 Elevate the standard ice pop with a little bubbly. These lemon champagne pops are sure to be a crowd pleaser. 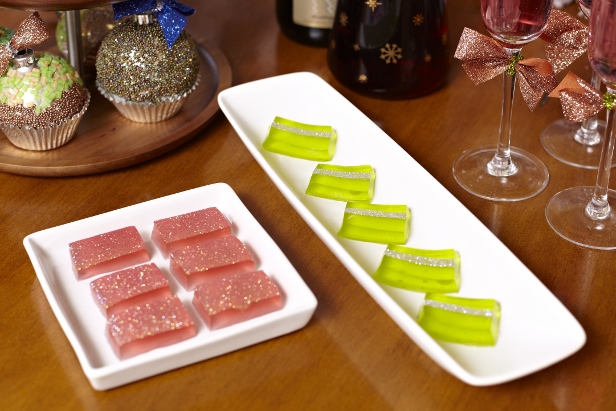 All Grown Up: Gelatin Shimmer Shots

Delight your guests by serving these sparkly, sweet treats at your next party. 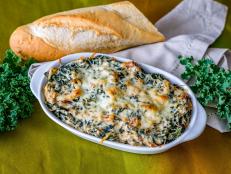 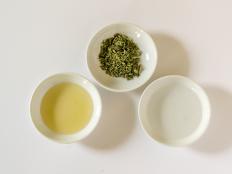 Skip the store and make your own natural, sweet-smelling spring cleaning staple. 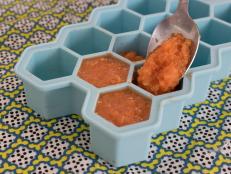 Learn how easy and efficient it can be to make your own baby food. 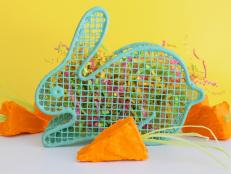 Accent Easter baskets this year with handmade treats, including these delicious crispy-rice carrots.
More from:

We're crushing on these trends, recipes and DIYs.

Get to know the crafty, creative writers and editors behind DIY's Made+Remade blog.

Go Behind the Blog