Are green potatoes safe to eat? In a nutshell, no. But there are some ways you can reduce the likelihood of problems.
By: Felder Rushing

Are green potatoes safe to eat? The short answer is no.

Though we have all heard that potato skins are the most nutritious part, green potato skin may be very dangerous to eat. It isn’t the green color itself, which is actually chlorophyll, but its presence often indicates hazard levels of a highly poisonous substance. Because of this, the United States National Institute of Health recommends never eating green potatoes.

Luckily, few people get green potato poisoning because the tubers have a distinctly bitter taste.

Joe Lamp'l shows how to plant, grow and harvest potatoes.

Potato plants, like tomatoes, eggplants, and peppers, are closely related to tobacco, the deadly nightshade, and other toxic plants, all of which produce solanine.

Solanine is part of these plants’ natural defenses against insects, disease, and predators. The more solanine, the more resistant the plant is to attack. In the past, the alkaloids in leaves, stems and uncooked raw potato tubers were used by people as pain relievers, anti-inflammation, and anti-rheumatic medicine. But such home remedies are not recommended, particularly if they involve eating or drinking the products.

The poisonous alkaloid is found in the green parts of potatoes, including new sprouts, stems, leaves, small fruits, and occasionally the normally-edible tubers if they are exposed to sunlight or stored improperly in very high or cold conditions. When they sprout and start to enlarge, even potato eyes can be poisonous. And because they are still actively growing, small immature tubers and “new” potatoes, especially when eaten with their skins, can be fairly high in the alkaloids.

Depending on how much is consumed, solanine poisoning can have effects ranging from mild discomfort to abdominal pain, nausea, diarrhea, vomiting, drowsiness, mental confusion, shortness of breath, weak and rapid pulse, and, eventually, respiratory failure.

Though by far the highest concentration of solanine in tubers is found in or right under the skins, there is a small amount within the tubers, which is why eating raw potatoes can give you an upset stomach. It is a common myth that boiling potatoes will safely remove solanine; truth is, it simply moves into the soup water! Only deep frying has been shown to significantly reduce solanine as it gets absorbed it into the oil, which is not consumed.

A lot of older and wild varieties of potatoes have high concentrations of solanine; some new varieties tested high as well, but most have been taken off the commercial market. Luckily, modern agriculture researchers have come up with potato varieties with less solanine, so we are unlikely to run into trouble with it in our part of the world. In fact an average adult male would have to eat more than four pounds of deeply green, bitter potatoes to get seriously ill.

So an occasional green potato chip won’t harm anyone. But it is a good idea to discard any potatoes that have green eyes, sprouts, or greenish skins, especially when preparing them for children whose smaller bodies make them more susceptible to the effects.

Reduce the risks by cutting away sprouts ("eyes") from potatoes and peeling them below any green layer. And don't eat any potatoes that taste bitter; the flavor might indicate the presence of solanine.

Is it okay to eat green potatoes? In a nutshell, no. But if you find yourself with some lightly green spuds, you can reduce the chances of illness by peeling them well and removing the eyes and any sprouts.

If someone eats potato plant parts, seek immediate medical attention. Call 911 or another local emergency number, or contact the U.S. Poison Control Center toll-free from anywhere within the United States (1-800-222-1222). You will be asked the condition of the victim, weight, time the green potatoes were eaten, and how much. Do not induce vomiting unless specifically directed by medical professionals. 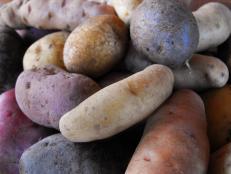 What Are Irish Potatoes?

Irish potatoes are not Irish – they are a type of white potato from South American which are forever associated with an infamous potato-disease famine in Ireland. 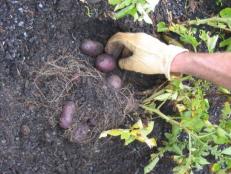 Harvesting potatoes is the fun part of growing your own; here are a few tricks to get the most out of your efforts.

Rooster potatoes, produced by the Albert Bartlett company, are a popular but patented new variety of red-skinned, yellow-flesh potato which are currently not legally available for growing by American home gardeners. 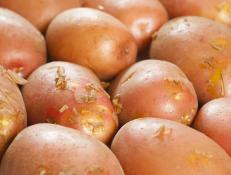 Waxy potatoes can be any shape, size, or color, but tend to be relatively low in starch, which causes them to retain their shape when cooked, making them ideal for boiling and chopping, not for mashing or baking. 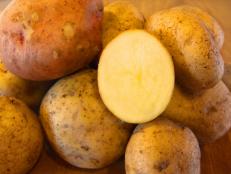 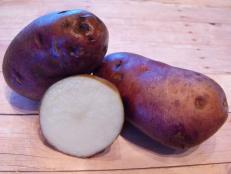 White potatoes are classics with light tan skin and pure white flesh, and are indispensable for using in nearly any recipe but are superb when boiled or fried. 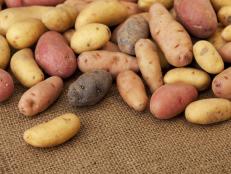 Many gardeners love hand-harvesting small, immature potato tubers early in the season from beneath still-growing plants. They tend to be extra sweet and tender. 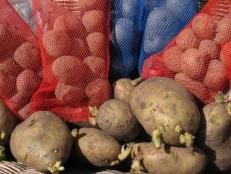 Potatoes make seeds - but they are not what you plant. Potato seed is what gardeners call small pieces of cut-up whole potato tubers, each with a growing bud that will form a new potato plant.

Growing your own potatoes? You should know that a ‘tater isn’t just a spud – there are several different types of potatoes, each with predictable characteristics, plus many varieties of each. 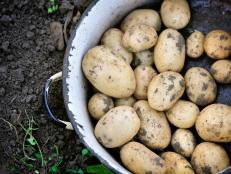 Many gardeners harvest a few small, immature potato tubers early in the season, because they are extra tender and sweet.

Building Off the Grid: Cliff House

Building Off the Grid: Cabin Wanderlust

Building Off the Grid: Cabin Wanderlust

Building Off the Grid: Cliff House