Showcase cherished memories in your home with these four great ways to display family photos.
By: Susan Kleinman

They're your favorite people and places and your most cherished memories; surely it's worth some effort to display your family pictures in style! Whether your decor is traditional or modern — and if you're handy or hopeless with a hammer — there's a beautiful way to give your family photos pride of place in your home.

Because the dining room of this home in Westwood, Calif., is only 18' x 15', it was especially important that the photo arrangement be sleek and simple, says designer Nicole Sassaman. To create the modern look she was after, Sassaman enlarged the pictures — all relatively recent shots of the residents' immediate family — to 8" x 10" each. The frames are stock items from Pottery Barn; similar ones are available at most decorating and art supply stores.

"When I can, I use even bigger frames than this, and very oversize mats," says Sassaman. But whatever the size, "I don't like to clutter things up with different frame finishes. I prefer to keep it simple by using identical frames."

Although the look may be simple, hanging these photographs was not. "To create a set-up like this, get out the measuring tape and bring your patience because it takes time and can be tricky," says Sassaman. 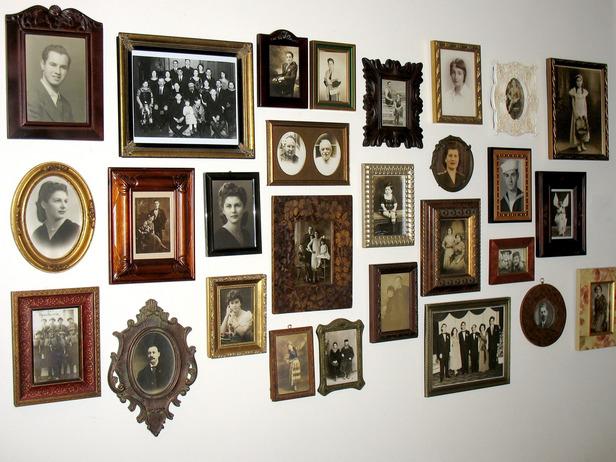 The positioning of these frames was carefully thought out to create a balance of frame sizes and colors.

The positioning of these frames was carefully thought out to create a balance of frame sizes and colors.

Although the antique frames that line this wall look like they were accumulated over time, they were all framed over the course of a few months.

"When you are shopping for frames, the trick is to coordinate the frame with its picture — not to match it too closely to the other frames. That way, it will appear as if the photos have been in their frames for a long time," says homeowner Susan Wechsler.

She took these photos of her grandparents and great-grandparents from old albums, framed them in flea-market and eBay finds, and hung them in the hall of her home in a suburb of New York City. For an early 20th-century photo of her grandmother, Wechsler chose a wooden frame with the same pinkish-brown tinge as the picture; a silvery shot of her husband's aunt from the 1950s is framed in a much simpler metal frame.

When the family photos were all framed, Wechsler laid them flat on Kraft paper on the floor, moving them around until the various sizes and shapes fit together like the pieces of a jigsaw puzzle and each frame looked good next to the ones surrounding it. Once she had struck a layout she liked, she traced the frames in their exact positions, taped the paper to the wall as a template and hung the pictures.

"This was time-consuming, but is definitely the most satisfying project I have completed in my house," says Wechsler. "My kids can identify their grandparents, great-grandparents and even great-great grandparents who are no longer with us, and everyone who walks into the house compliments the way the photos look."

If measuring, re-measuring and measuring a third time are not your idea of a fun Sunday afternoon, there's another solution to showing off your favorite pictures.

In the den of her Tribeca apartment, designer Sherri Donghia has displayed her favorite pictures behind the glass doors of a painted Indonesian cabinet. While some of the frames, such as the art deco piece in the lower right corner, have been paired with the same photographs since the pictures were taken, Donghia also likes to use old frames from antiques stores and flea markets.

Because the cabinet is also home to her favorite Venetian drinking glasses, Donghia opens the doors frequently and gets a glimpse of her father who passed away many years ago.

"It's such an important thing to have pictures around," says the author of Donghia: The Artistry of Luxury & Style. "People really want things that are personal and individual, and creating these little vignettes allows you to add something that is special just to you."

All Dressed in White 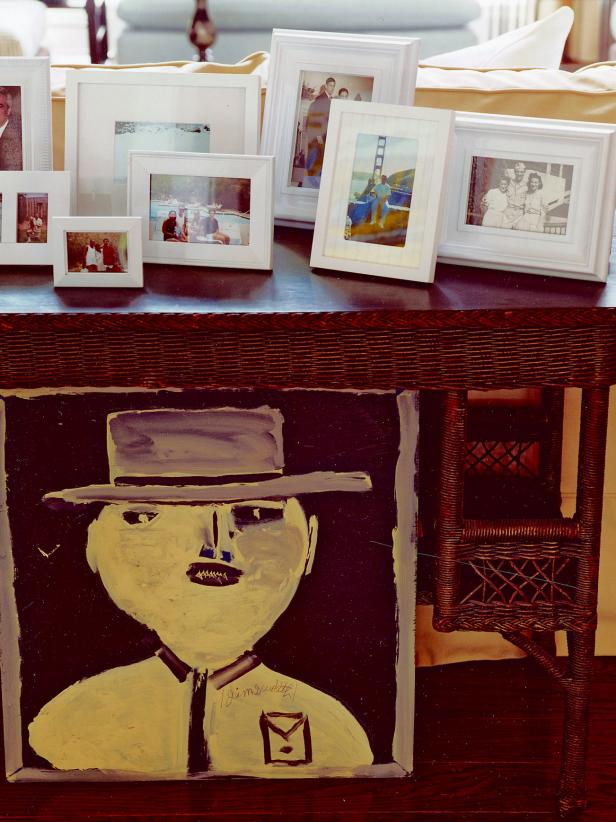 he photos in this lakeside retreat used to be framed in many styles and colors. (Photo by James Merrell)

he photos in this lakeside retreat used to be framed in many styles and colors. (Photo by James Merrell)

Mitchell Gold recently decided to frame the photos in his lakeside retreat all in white.

"I wanted to give the room a fresh and more serene look," says Gold, co-founder of the Mitchell Gold + Bob Williams furniture company and co-author with Williams of Let's Get Comfortable: How to Furnish and Decorate a Welcoming Home. "These frames are on a console table that faces the front door, and gave a cleaner look to the first view of the living room you get when you walk in the house. It helped simplify things while allowing me to keep the warm and welcoming display of photos of family and friends."

Whether you're framing your favorite photos in a mix of finishes or all in white, "skip the formal graduation pictures and posed portraits and go for candids," Gold says. "Not only of people up close, but of friends in settings that remind you of great times together."

And remember to avoid too much of a good thing. "Too many photographs lead to a cluttered feeling in a room," says Williams. "Better to edit your collection of anything — including photos — store some away and rotate photos in and out occasionally to keep things interesting." 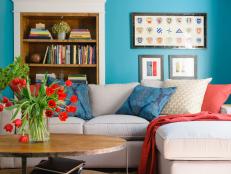 10 Things to Put Above Your Sofa

Get creative ideas to fill that empty wall behind the couch. 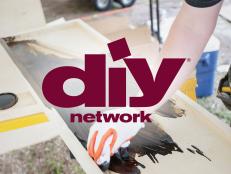 Useful tips for DIYers on walls and refinishing. 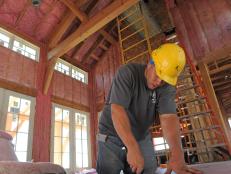 Tips for Installing Insulation and Drywall

Learn about the different types of insulation and how to prep for drywall installation. 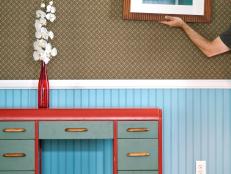 Follow these tips for how to hang pictures, where to hang them and how to group them together. 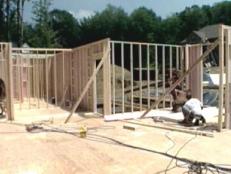 Everything You Need to Know About Walls

Host Jeff Wilson explains how exterior and interior walls are constructed in a new home. 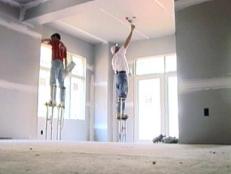 Closing Up the Walls: Hanging Drywall

As Home IQ follows the Obergs' home construction process, the homeowners take a walk through the house to make sure various facets are in the right place. Also, building scientist Glenn Cottrell explains drywalling. 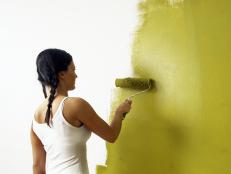 Learn tips before you buy, how to prep, the essential tools and clean-up tricks. 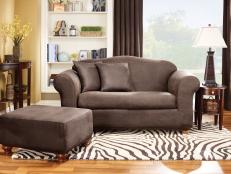 Thinking about slipcovers? Find tips and hints on how to decide if a slipcover is your best solution, or should you go one step farther and reupholster. 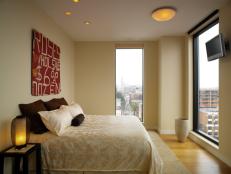 Five Ways to Decorate With Red

The color red mixes well with almost any color scheme, but how do you decorate with red without going overboard? Here are five quick and easy ways to add red to your home. 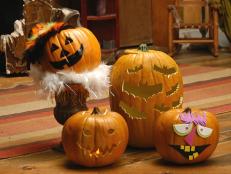 Whether real or faux, learn these fun and clever tips for creating that impressive Halloween pumpkin.
7am | 6c
7:30am | 6:30c