Change a Bulb, Change the World, Save Some Green

Installing energy-saving fluorescent bulbs will not only help save the planet, it will help save your budget.
By: Douglas Trattner

But there is hope, he says. As challenging as this issue may be, something as simple as changing a light bulb can have a significant impact on reducing the world's greenhouse gas emissions, the leading cause of global warming.

According to the U.S. Environmental Protection Agency's ENERGY STAR, if every American home replaced just one incandescent light bulb with an energy-saving light bulb, we would prevent greenhouse gases equivalent to the emissions of more than 800,000 cars. Imagine what we could accomplish by swapping out even more?

To produce light in a traditional incandescent bulb, energy passes through a thin filament, which heats and illuminates it. This technology is extremely inefficient, with only 10 percent of the energy used going to the production of light. The other 90 percent is wasted as heat.

Fluorescent bulbs, on the other hand, produce light by electrically exciting a vapor in the tube, causing it to fluoresce. This process consumes 75 percent to 80 percent less energy, produces far less heat, and yet delivers all the light a person might need.

The environmental and economic benefits of CFLs, he says, make the decision to replace traditional incandescent bulbs a no-brainer. Not only do the bulbs consume a quarter of the energy, they last 10 times longer. This translates into a 30-dollar reduction in electricity costs over the life of each and every bulb.

According to Environmental Defense, if a homeowner replaced 10 60-watt incandescent bulbs with energy-saving alternatives, he or she would save almost $300 in energy costs over the life of the bulbs and prevent the production of 3,400 pounds of carbon dioxide.

Everyone seems to have had not-too-fond experiences with fluorescent bulbs. Not very long ago, most bulbs on the market required a long time to warm up and turn on. And when they finally did, the light they produced was unflattering, cold and often inconsistent. Worst of all, they hummed and buzzed as though they were filled with honeybees.

Well, those days are long gone. Recent technology has cured most ills associated with compact fluorescent bulbs, making them not only a sensible choice, but a painless one as well. Today's models come on quickly and provide quiet, consistent, bright-white light. A myriad of sizes and shapes make them appropriate for any standard fixture, indoors and out. Prices have plummeted, to boot.

Where Should I Start?

The U.S. Environmental Protection Agency's ENERGY STAR recommends installing energy-saving bulbs in areas where lights are used frequently and left on for a long time. These include the kitchen, family room, dining room, living room and front porch.

CFLs now come in varying shades of light, or color temperature, measured in Kelvin. If you prefer a warm, soft glow, look for bulbs with lower Kelvin numbers, typically in the 2700 to 3000K range. For brighter, more natural light, seek out bulbs with higher ratings, in the 4000 to 6000K level.

Homeowners might find that a particular CFL is too wide to fit within a table lamp's harp, the metal shade support. Companies like Black Energy (www.blackenergy.com) sell harp extenders for as little as 65 cents. One might also encounter bulbs that are too thick to screw into some light sockets. A simple socket extender, available at Black Energy for $2, should do the trick.

A Word about Mercury

All compact fluorescents contain trace amounts of mercury, a harmful substance. Although the bulbs contain far less mercury than other household items, care needs to be taken to prevent breakage. Also, when CFLs burn out, they should be recycled. To find the closest recycling center near you, visit www.lamprecycle.org.

LEDs can last up to 20 years. And at 90 percent efficiency, the bulbs sip electricity. But this doesn't mean LEDs are ready to supplant all other bulbs just yet. For one, they provide only directional light, not diffused light, making them ideal for under-counter task lighting, but not general room illumination. To overcome this, new models consist of large arrays of LEDs clustered together. But at prices from five to six times higher than CFLs, the bulbs are not for everybody. 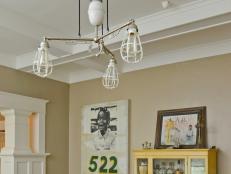 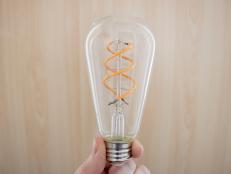 Find out if Edison bulbs are the right fit for your home. 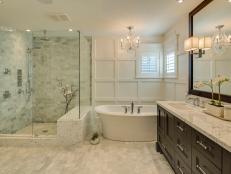 Energy codes and utility bills are making energy efficient lighting a must, even in today's spa-like baths. Products now hitting the market are both functional and fashionable. 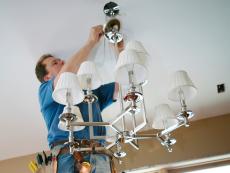 High-Fashion Lights for a Low-Budget Price

Armed with some creative advice from lighting experts, a budget-minded bathroom makeover need not leave you in the dark. 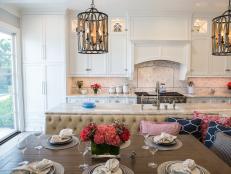 Kitchen Lighting: Brilliance on a Budget

These tips for low-cost kitchen lighting are kind to your wallet and keep your kitchen shining in style. 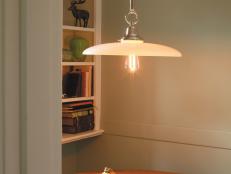 Need to brighten up the heart of your home? Check out these easy, inexpensive lighting solutions. 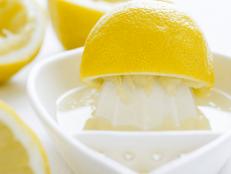 Find seven household uses for lemons. They are a natural disinfectant, stain remover and are wonderful for polishing metal. Also, lemons are inexpensive and eco-friendly. 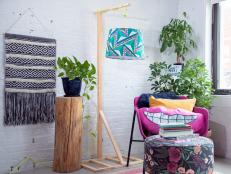 Build this super-simple floor lamp then make it bold by customizing the lampshade. 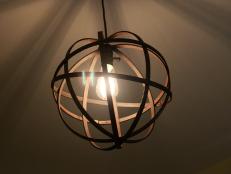 Transform those versatile wooden frames into an inexpensive and easy chandelier and gallery wall. 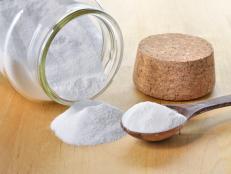 The Many Uses for Baking Soda